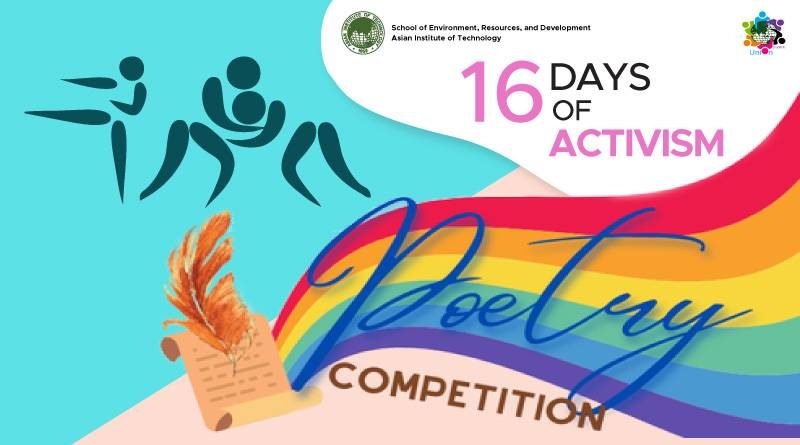 November 25th, 2021 – Every year, December 10th marks a significant international event known as “16 Days of Activism,” a campaign that calls for the prevention and elimination of violence against women and girls.

To join the call and commemorate this important event, a group of students at the Asian Institute of Technology (AIT) from the Gender and Development Studies (GDS) Program has formed a club with a goal to create an inclusive society, starting at an institution near and dear to them – AIT.

With students living and studying in a multicultural environment, the club aimed to promote and heighten “inclusivity” as its goal, as well as envisioned to imprint on everyone the “gender lens” where an inequality or imbalance of power based on gender is visible in everyday life. To achieve these goals, in December 2021, the club initiated activities such as a poetry contest, to commemorate the “16 Days of Activism” event and a self-defense workshop to commemorate the “Human Rights Day” on December 10th.

One of the founding members of the club, Renz Prudenciado, a newly elected AIT Student Union (AIT SU) General Assembly Speaker, explained how she sought to make her fellow students aware of the importance of ending human rights violations through the concept of inclusivity, her motto is “Everyone can belong. Everyone must belong”.

Another key member, Farheen Masfiqua Malek, the Chairperson of the AIT SU Gender and Culture Committee, with an experience of working at a refugee camp in Bangladesh, explained that in some societies, women are being dictated and limited to fewer choices in education and career. Starting with AIT community, she is determined to encourage empowerment, citing that “empowerment is a matter of being able to choose what is good for you, and is a right to share your opinion without fear.”

One of the most important aspects of the poetry contest, the two organizers explained, was to make everyone vocal, including the LGBTQAI+ community. Through their participation in the poetry contest, members of the LGBTQAI+ and their allies could express their thoughts, issues, and concerns – making the voices and realities of the community be heard and recognized. Renz and Farheen had designed for the students to express themselves safely and freely by allowing an option for a poem to be submitted anonymously. Farheen said that the club had vowed to support and provide safe spaces for everyone to be themselves.

Renz also hoped that the poetry contest would bring about recognition of everyone’s power and role in ending gender-based violence. She further added that, “At the end of the poetry competition, both the poets and the readers will gain the meaningful insights into a wide spectrum of human experience and the Sexual Orientation, Gender Identity, and Expression (SOGIE)”.

As for the self-defense workshop, the group of GDS students shared that this event symbolizes “empowerment” in response to Human Rights Day, with an idea that the knowledge on self-defense could make everyone feel safe and secure wherever they go. The trainer of the self-defense workshop is also an AIT student — Mishak Rahul, a master of engineering student from the School of Engineering and Technology, a holder of Black Belt in Karate, and a holder of Guinness World Record (Group) for the “Most Full Contact Kicks in One Hour by a Team” (54,127 kicks/hour).

By way of concluding the importance of the events being organized as part of the “16 days of activism,” a club member Marissa Hernando-Valdez emphasized that the discussion on gender development and gender inclusivity should be brought to the fore as it affects every aspect of the society. To do so, a gender lens should be employed when developing any projects or undertaking any activities, whether in the fields of engineering, environment of management, Hernando-Valdez explained. In summary, what the club wanted to see happening, highlighted by another member Ruzette Mariano is that “the moment we start talking about people, we start talking about gender.”

The club has planned to continue with their mission to promote inclusivity, well even after the “16 Days of Activism” and “Human Rights Day” ended. The members are tasked with laying a foundation for people from all backgrounds and cultures, with any gender identity to belong to AIT community, as well as empowering each other in making their voices heard.

16 Days of Activism started by activists at the inaugural Women’s Global Leadership Institute in 1991 and continues to be coordinated each year by the Center for Women’s Global Leadership. It is used as an organizing strategy by individuals and organizations around the world to call for the prevention and elimination of violence against women and girls.

Human Rights Day is observed every year on December 10th — the day the United Nations General Assembly adopted, in 1948, the Universal Declaration of Human Rights (UDHR), proclaiming the inalienable rights that everyone is entitled to as a human being regardless of race, colour, religion, sex, language, political or other opinion, national or social origin, property, birth or other status.