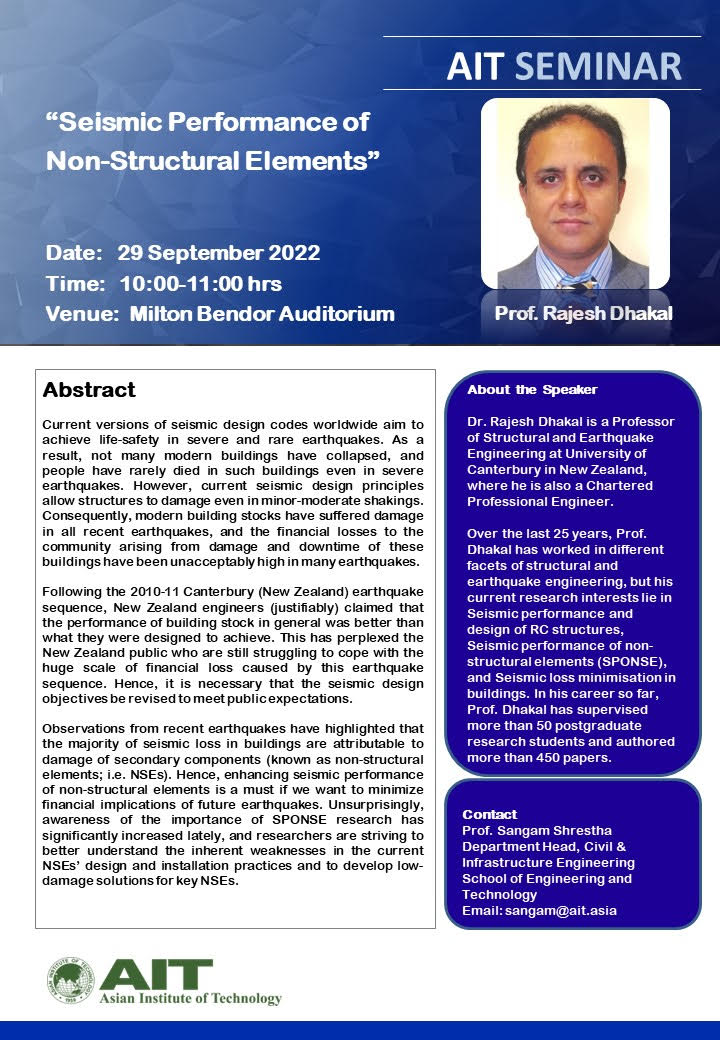 Please find the registration link to express your interest to participate in these seminars: https://forms.gle/adCmPw2L5xPXtZHw9

Abstract:
Current versions of seismic design codes worldwide aim to achieve life-safety in severe and rare earthquakes. As a result, not many modern buildings have collapsed, and people have rarely died in such buildings even in severe earthquakes. However, current seismic design principles allow structures to damage even in minor-moderate shakings. Consequently, modern building stocks have suffered damage in all recent earthquakes, and the financial losses to the community arising from damage and downtime of these buildings have been unacceptably high in many earthquakes.

Following the 2010-11 Canterbury (New Zealand) earthquake sequence, New Zealand engineers (justifiably) claimed that the performance of building stock in general was better than what they were designed to achieve. This has perplexed the New Zealand public who are still struggling to cope with the huge scale of financial loss caused by this earthquake sequence. Hence, it is necessary that the seismic design objectives be revised to meet public expectations.

Observations from recent earthquakes have highlighted that the majority of seismic loss in buildings are attributable to damage of secondary components (known as non-structural elements; i.e. NSEs). Hence, enhancing seismic performance of non-structural elements is a must if we want to minimize financial implications of future earthquakes. Unsurprisingly, awareness of the importance of SPONSE research has significantly increased lately, and researchers are striving to better understand the inherent weaknesses in the current NSEs’ design and installation practices and to develop low-damage solutions for key NSEs.

Dr. Rajesh Dhakal is a Professor of Structural and Earthquake Engineering at University of Canterbury in New Zealand, where he is also a Chartered Professional Engineer. Over the last 25 years, Prof. Dhakal has worked in different facets of structural and earthquake engineering, but his current research interests lie in Seismic performance and design of RC structures, Seismic performance of non-structural elements (SPONSE), and Seismic loss minimisation in buildings. In his career so far, Prof. Dhakal has supervised more than 50 postgraduate research students and authored more than 450 papers.

Abstract:
Several historical earthquakes have caused widespread liquefaction of reclaimed fills, including the damage observed in Kobe Port Island (Japan) in the 1995 Mw6.9 Kobe earthquake, and the damage in the port of Wellington (New Zealand) in the 2016 Mw7.8 Kaikōura. These case histories are of significant interest for geotechnical engineers from an international perspective since the liquefied fills that caused widespread damage are gravelly by composition, which have historically been considered to be more resistant to liquefaction triggering than sandy soils. In particular, simplified assessment of liquefaction triggering and its associated consequences are commonly evaluated using methods based on case histories predominantly on naturally-deposited clean sand and non-plastic silty sand deposits, and there are few case histories involving reclaimed land composed of gravelly soil.

As there is a wealth of scientific and practical engineering information available, these case histories provide a unique opportunity to investigate various aspects of liquefaction evaluation of gravelly soils including the applicability of state-of-the-practice simplified and advanced assessment procedures. This study focuses on the Wellington case study by utilizing results from laboratory index testing and comprehensive in-situ site investigation, including over 100 Cone Penetration Tests (CPTs), to evaluate the applicability of widely used state-of-the-practice simplified CPT-based liquefaction triggering and settlement evaluation methodologies on the reclamation fills. Results from advanced dynamic effective stress analyses are also shared to illustrate additional insights one can gain from the analyses, as compared to the simplified approach.

Dr. Riwaj completed his PhD at the University of Canterbury in 2022 with a research focus on liquefaction of reclaimed land using simplified and advanced analyses. His research interests is in Earthquake Engineering. Ribu’s work involves strong research collaboration with several top research institutes around the world, such as the University of California, Berkeley, University of Pavia, and Brigham Young University.