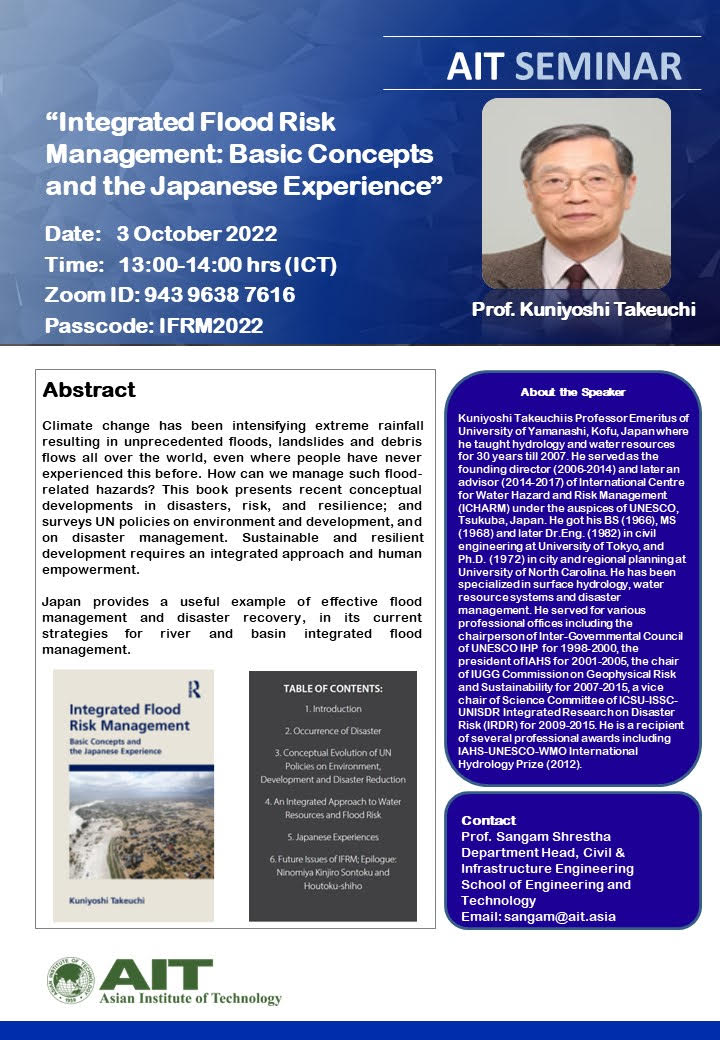 I would like to cordially invite you all to the seminar delivered by Prof. Kuniyoshi Takeuchi, Professor Emeritus of University of Yamanashi & founding director (2006-2014) and later an advisor (2014-2017) of International Centre for Water Hazard and Risk Management (ICHARM) under the auspices of UNESCO, Tsukuba, Japan.

Abstract:
Climate change has been intensifying extreme rainfall resulting in unprecedented floods, landslides and debris flows all over the world, even where people have never experienced this before. How can we manage such flood-related hazards? This book presents recent conceptual developments in disasters, risk, and resilience; and surveys UN policies on environment and development, and on disaster management. Sustainable and resilient development requires an integrated approach and human empowerment.
Japan provides a useful example of effective flood management and disaster recovery, in its current strategies for river and basin integrated flood management.

Brief CV of Prof. Kuniyoshi Takeuchi:
Kuniyoshi Takeuchi is Professor Emeritus of University of Yamanashi, Kofu, Japan where he taught hydrology and water resources for 30 years till 2007. He served as the founding director (2006-2014) and later an advisor (2014-2017) of International Centre for Water Hazard and Risk Management (ICHARM) under the auspices of UNESCO, Tsukuba, Japan. He got his BS (1966), MS (1968) and later Dr.Eng. (1982) in civil engineering at University of Tokyo, and Ph.D. (1972) in city and regional planning at University of North Carolina. He has been specialized in surface hydrology, water resource systems and disaster management. His current interest includes, inter alia, transdisciplinary approach for scientific decision making for building societal resilience to disasters. He served for various professional offices including the chairperson of Inter-Governmental Council of UNESCO IHP for 1998-2000, the president of IAHS for 2001-2005, the chair of IUGG Commission on Geophysical Risk and Sustainability for 2007-2015, a vice chair of Science Committee of ICSU-ISSC-UNISDR Integrated Research on Disaster Risk (IRDR) for 2009-2015. He is a recipient of several professional awards including IAHS-UNESCO-WMO International Hydrology Prize (2012).