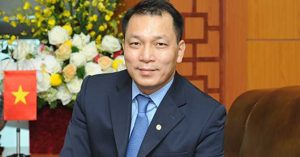 Dang Hoang An, an alumnus of the Asian Institute of Technology (AIT) has been appointed as Deputy Minister of Industry and Trade in Viet Nam. Prior to his elevation as Minister, he was serving as General Director of Electricity Viet Nam (EVN). He was appointed by Prime Minister Nguyễn Xuân Phúc, and his elevation became effective from 15 May 2018.

Dang Hoang An (spelt Đặng Hoàng An in Vietnamese) graduated with a Master’s in Electric Power System Management from AIT in 1997, and an MBA under the International Executive MBA Program in 2004.  He obtained his Bachelor’s in Electrical System Engineering from the University of Electrical Machines Plzen (Czech Republic) in 1988.

News reports about his appointment as Minister and his association with AIT were published by various news media: