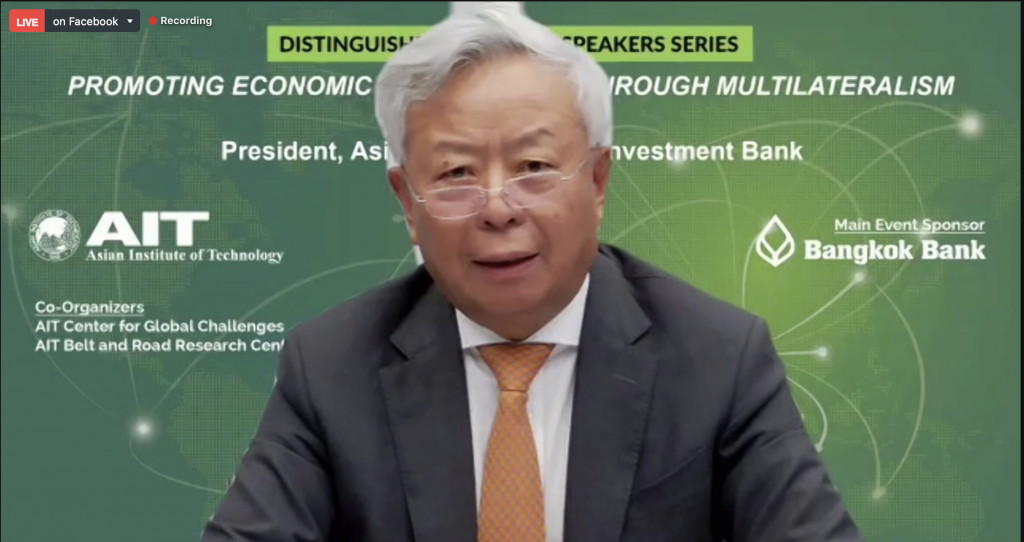 October 15, 2021 — The Asian Institute of Technology (AIT) Distinguished Institute Speakers Series was launched on October 15, 2021, with President of the Asian Infrastructure Investment Bank (AIIB), Jin Liqun, speaking via Zoom on “Promoting Economic Development Through Multilateralism” to an audience from universities, embassies, private and public companies, government agencies, and NGOs from across the region. President Jin of this multilateral bank shared his vision for economic development of the region which includes technology-enabled infrastructure and a possible collaboration with AIT.  This speech was also co-organized by the AIT Center for Global Challenges and the AIT Belt and Road Research Center, and it was sponsored by Bangkok Bank.

The address by Mr. Jin is first in the series of AIT Distinguished Institute Speakers Series, which will feature distinguished speakers once or twice a year.  “Through this series, AIT aims to bring to AIT’s community and friends globally prominent individuals who have widely-recognized reputation, accomplishments, and responsibilities in different fields in academics and beyond, in order to broaden our horizon and to inspire our students,” AIT President Eden Woon said.

President Jin Liqun is the inaugural President and Chair of the Board of Directors of the Asian Infrastructure Investment Bank (AIIB). He noted that the mandate developed seven decades ago by the Bretton Woods institutions, the World Bank and International Monetary Fund, have contributed to many achievements in the wake of the World War II. Founded in 21st century with modern governance structure, AIIB is a new multilateral development bank that aims to promote economic development with new approaches. AIIB is designed to complement the efforts of the existing MDBs and to coordinate with them to pursue the common objectives in the interests of their members and the international community.

Mr. Jin said that Infrastructure investment for AIIB is defined in a broad way to include ‘other productive sectors’ – including social sector. The bank finances projects to contain covid-19 pandemic and vaccines purchases to its members affected by the COVID-1, deeply convinced that only a healthy nation is productive. The AIIB President said that he also contemplates on funding for education to address the age of Artificial Intelligence in the future, but at this stage AIIB will not spread itself too thin and will instead focus on the Bank’s financing for the mainstream infrastructure.

“We would like to build technology-enabled infrastructure. We do infrastructure in a new way which is more environmentally friendly, and would drastically cut greenhouse gas emissions,” said the President of AIIB. Noting that low-income countries tend to be affected by low technology, Mr. Jin shared his vision of promoting technology development or technology upgrades to support economic development.  He emphasized that multilateral institutions are even more vital in a period of anti-globalization and geopolitical tension.  President Jin emphasized the core values of AIIB as a new-type multilateral development bank with the 21st century governance. The AIIB will remain lean, clean and green.

Mr. Jin ended his talk by noting that the two multilateral institutions:–the Asian Infrastructure Investment Bank and Asian Institute of Technology—can explore collaborations to provide technology and to develop technology-enabled infrastructure in this region.

The Asian Infrastructure Investment Bank (AIIB) is a multilateral development bank, focused on developing Asia with members from all over the world. AIIB began operations in 2016 with 57 founding members. By the end of 2020, it has 103 approved members, representing approximately 79% of the global population, and 65% of global GDP. Mr. Jin Liqun is founding President and Chair of the Board. 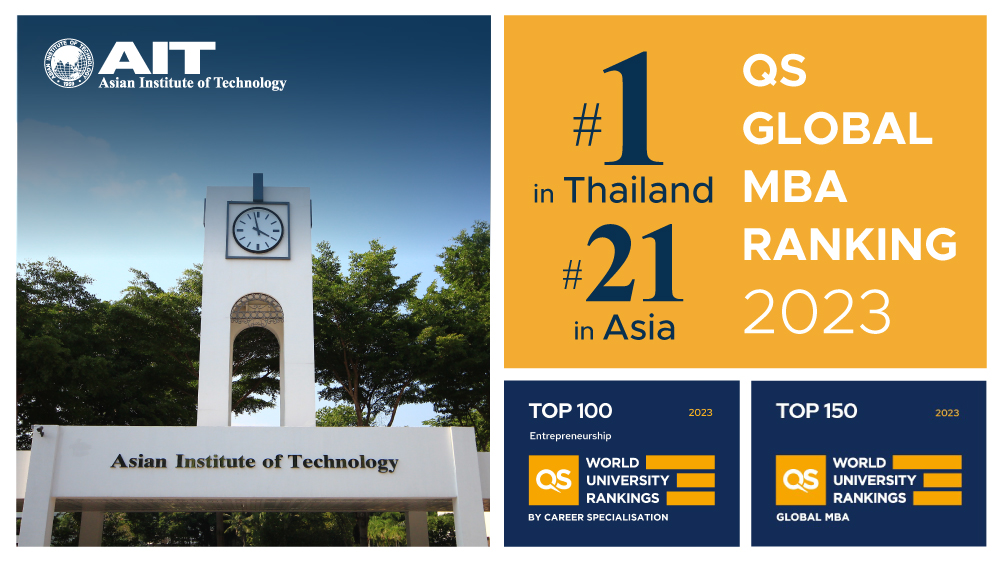 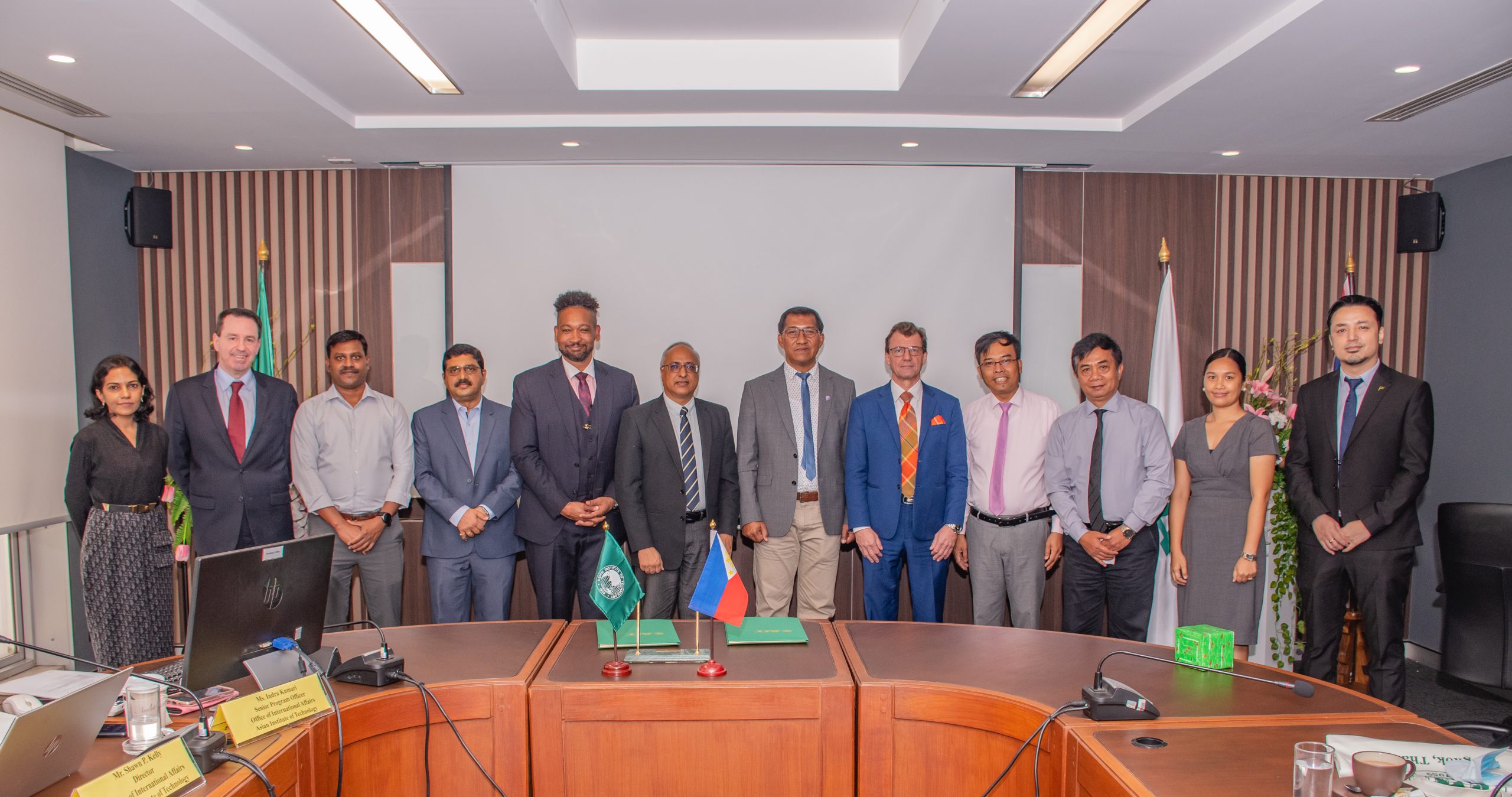