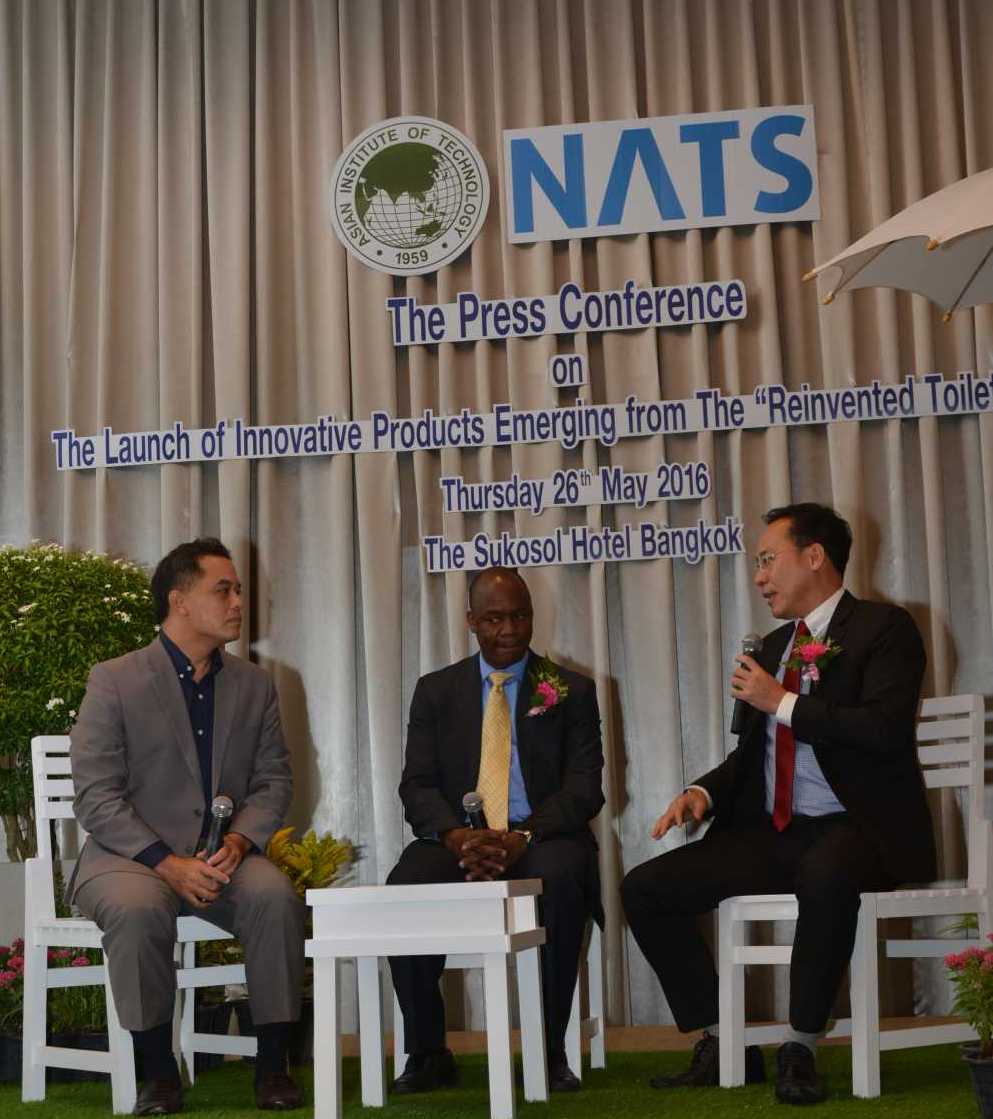 Announcing the official launch, AIT experts said these sanitation products would help Thailand take the lead in improving the quality of life in both Asia and Africa, where they will be implemented. AIT is already implementing these technologies in both Thailand and Vietnam, and it is in an advanced stage of negotiations for its commercialization in India.
Dr. Thammarat Koottatep, the Principal Investigator of the project stated that all products are aimed at on-site cleaning which is aimed at reducing transportation of sludge and fecal matter to treatment plants. “The idea is to have an on-site treatment that is decentralized
so that we can avoid transportation of fecal matter over long distances.”
Dr. Doulay Kone, Deputy Director, Water, Sanitation and Hygiene (WASH) at the Bill & Melinda Gates Foundation stated that AIT was one of the grant recipients from the Gates Foundation’s Water, Sanitation, & Hygiene Team in 2011. “AIT has done an excellent job, and now that the technology is ready, we are eagerly looking forward towards its implementation in both Asia and Africa,” Dr. Kone said.The four products include a Hydro-Cyclone cube which is a toilet that uses gravity and the concept of a cyclone to separate liquid and solid wastes. Disinfection is achieved by heating and the disinfected fecal matter is used as a solid conditioner. A complete treatment of blackwater results in a pathogen-free byproduct which is reusable.

The Sanitizer Truck is an innovative truck which is equipped with a solid-liquid separator and disinfection system. This decreases the cost of transportation and treatment, and increases both fecal sludge management efficiency and provides revenue generation options through sludge recycling.

The “Cess to Fit” system is a retro-fitting system which can be fitted into existing cesspool systems to hold and treat fecal matters before discharging them into the environment.

The Solar Septic System uses solar energy to increase the rate of killing of pathogens, increases biodegradation of organic matters, and produces better quality of septic tank effluents, leading to better environmental protection and public health benefits. The accumulated solid is reduced by 50 per cent compared to conventional septic tanks.

Addressing a press conference in Bangkok, Dr. Thammarat said that these products will help establish Thailand as a leader in water and sanitation technologies in the entire ASEAN region and beyond. “We have already ordered for the manufacture of these products for our clients in Vietnam, and we are talking to parties in India who wish to use them in their Clean India Campaign.”

He added that although Thailand is a leader in sanitation coverage, the figures for fecal sludge treatment are alarming. In Thailand, 60,000 tons of fecal sludge is collected per day, but only 4,500 tons per day (i.e., less than 10%) are treated correctly. “All these
products are aimed at rectifying this situation by focusing on on-site treatment,” Dr. Thammarat added.

The press conference and discussion was moderated by well-known Thai TV star  Suthipongse Thatphithakkul, who interspersed scientific information about the four products with anecdotes and his trademark witticism.

Welcoming the delegates, Dr. Subin Pinkayan, Chairman, AIT Board of Trustees thanked the Bill & Melinda Gates Foundation and complimented AIT’s research team for its success. “Apart from undertaking research for academic purposes, I envisage that Research-to-Business route adopted in this project would pave the way towards providing sustainable benefits to both the institute and the society,” Dr. Subin added.

AIT President Prof. Worsak Kanok-Nukuchai stated that in 2012, AIT had delightfully accepted a challenge mooted by the Bill & Melinda Gates Foundation to “Reinvent the toilet,” which was aimed at proper treatment of toilet wastes at affordable costs to the urban poor.

“Courtesy of over five decades of expertise and experience in Environmental Engineering at AIT, we were extremely confident that we would overcome this challenge. Today, four years later, we are happy to announce the launch of four sanitation products that are ready for commercialization,” Prof. Worsak said.

Earlier, this project was formally kicked-off at a function organized on 24 September 2012 in Bangkok. The Environmental Engineering and Management field of study at AIT’s School of Environment, Resources and Development is the new project holder for the field research project on “Sustainable Decentralized Wastewater Management Systems” lasting from 2012–2017. Close to 50 researchers and experts hailing from Southeast
Asia, South Asia, Europe, Africa and South America are actively engaged
in this project.

Details about Naturally Acceptable and Technological Sustainable (NATS) Toilet are available at this link http://natstoilet.com/

A photogallery from the event is available at these links:
Facebook: https://goo.gl/sz8Dge