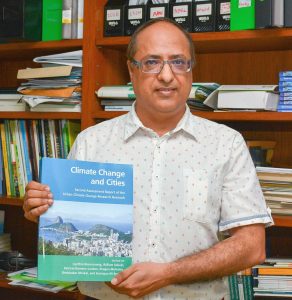 Dealing with  Environmental Policy, Economics and Law, Climatology and Climate Change,Earth and Environmental Sciences, the volume  has been published by Cambridge University Press.

“The book explores the implications of changing climatic conditions on critical urban physical and social infrastructure sectors and intersectoral concerns,” says Dr. Shobhakar. It seeks  to inform the development and implementation of effective urban climate change policies, leveraging ongoing and planned investments for populations in cities of developing, emerging, and developed countries.  The volume is targeted at audiences involved with climate change and cities: mayors, city officials and policymakers; urban planners; policymakers charged with developing climate change mitigation and adaptation programs; and a broad spectrum of researchers and advanced students in the environmental sciences.