Ms. Dulani Chamika Withanage, an alumna of the Mechatronics program at the Asian Institute of Technology (AIT), is a key person associated with the development of Sri Lanka’s first satellite known as Raavana 1. Weighing 1.1 kilograms, the cube-sized satellite was launched into space from the mid-Atlantic space station in Virginia on 18 April 2019.

Ms. Dulani Chamika paid tribute to both AIT and her faculty advisor Prof. Manukid Parnichkun. “AIT is my second home,” says Dulani, “and it is there that I grew up as an independent person,” she adds. She credits AIT for laying the foundations for her research, particularly through the time she spent working in the Mechatronics laboratory after completing her studies.

“It was a student project, and I became associated with the project during my further studies at the Kyushu Institute of Technology,” says Dulani. She joined the BIRDS-3 project, which seeks to take the first step toward creating a home-grown space program by designing, building, testing, launching, and operating the first satellites for participating nations. Led by Japan’s Kyushu Institute of Technology, it involves students from Sri Lanka, Bhutan, Nepal, and Japan.

“My specific role in the project concerned the Attitude Determination and Control System (ADCS),” reveals Dulani. “After deployment, the angular velocity of the satellite can be very high. This implies that we need to stabilize the satellite so that it can perform its mission properly and communicate with the ground station,” she explains.

Congratulating his student, an elated Prof. Manukid added: “I congratulate Miss Dulani Chamika on the success of Sri Lanka’s first CubeSat development and launch. I am so proud of her! The continuous successes of AIT alumni make everyone happy; they are our best ambassadors.” 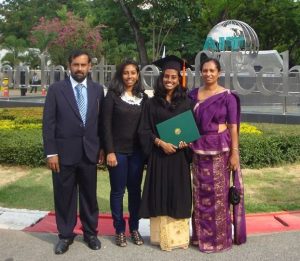 Ms. Dulani Chamika Withanage (second from right) with her family at the AIT graduation (May 2014).

Following the launch, the next step is to place the satellite into orbit with the robot arm attached to the Japanese ISS Kibo module in May-June.

Dulani worked with her compatriot Tharindu Dayaratne at the Arthur C. Clarke Institute, Moratuwa, Sri Lanka. The mission is being described as the first step in the acquisition of space technology by Sri Lanka. A low-orbit satellite, it will orbit at an altitude of 400 kilometers, and it is expected to complete five missions to enable Sri Lanka to obtain imagery of Sri Lanka itself as well as the neighboring region.

While this is a first step, it could be the beginning of a long journey in the realm of satellites for Sri Lanka. Nanosatellites are constrained by their size and functions, and Dulani hopes to follow this up with work on more challenging satellite projects for Sri Lanka.